Commentary – Why I Am Getting Budget Smartphones (and I thank God for that!)

Just completed another smartphone review with Techgoondu on the HTC Desire 816 budget phone and you can read more about it in the link above.

Simply put, we guys who are holding on to the 12GB data plan at last have a reprieve. For the past 3-4 years since my last contract was signed to get the Samsung S2 (yup that is way back to year 2011). So my contract has lapsed in 2013 since then I have won a ASUS Padfone 2 which I dropped and cracked the screen in HK, then got myself the ASUS Padfone Infinity at a special price.

I was thinking what would happen 2 years down the line when I need to replace the Infinity and looking at the retail price of non-contract phones it got me thinking about the value of recontracting versus getting a retail set.

So this is my line of thinking so if you subscribe or not, it is up to you to decide. If you agree, then all I can say is you will save a bundle. If you don’t then go ahead and recontract and get a new phone albeit with 2-3GB of data.

To get it off my chest this is the crux of the whole matter and made me a bit pissed off: 12GB with LTE is possible. How come? LTE or mislabelled 4G, is actually an add on service to the 3G service. I guess by now those who know about Starhub charging for 4G should understand that it is add on service and not entirely a new technology. So from that point of view, so long one has a 3G service, one can just add LTE to the service and become a 4G line.

And since they are at the moment giving it for free for those already in contract, then I just opted in at the point I changed my SIM card to the NanoSIM. What if they start charging? At SGD10.70 more I am still paying good money with 12GB data as opposed to those who who recontracted to 2GB. If I assume that i get a 10GB more for my line, the amount of money I paid to have that is still much more than the 10 dollars extra I pay for my old line.

So you can imagine the rage I have to hold down every time people say need to recontract to enjoy 4G?

Edit 4 Aug 2014: Apparently, this loophole was closed with a quick check on their FAQs. Singtel, instead of honouring what a VAS is supposed to be, decided to make LTE service which is a 3G based service another, into something that consumers cannot use unless they recontract to the ridiculously low 2GB data.

So to help some folks here to make sense, I refer to Singtel data bundled plans. My suggestion is to get Lite at $39.90 and then pay $21.40 for extra 2GB more.  This way as compared to the Plus plan, you are paying around $40 lesser but with 400 min less for local calls and 200 lesser SMS. Still for those heavy on data and less on voice+SMS, it is a better solution. To me 4GB is more than enough for most people with LTE but I would refrain tethering phone to Laptop when you are out and about.

The caveat of course is that every time I have a spoiled phone and yet I want to maintain the old contract, I have to get a retail set which is not a very enticing choice because of the high price.

This year’s IT surprise – The Xiaomi Redmi.

You should see the joy written on my face when Xiaomi Redmi was made available for sale. With 2 SIM card, a removable battery and SD card slot at a price that is like ridiculously c̶h̶e̶a̶p̶ affordable, what’s not to like? At that time I don’t really know about MiUi but once you get it, you understand how simple it is too. Yes to some it resembles Apple because it got rid of the App tray but generally it still have widgets and all things Android…and themes too!! All these for a mere S$169.00.

The Xiaomi Mi3s – 3G Smartphone Powerhouse. For those who wants some horsepower without the LTE.

Xiaomi has hit jackpot in China and now it spread the jackpot to the rest of the world so much so it has become Global Top 10  for smartphone shipments even knocking out HTC in the process.

So it is little wonder that HTC has seen the threat and delivered the Desire 816 and 610. Yes there are a bit more expensive but they are using Snapdragon chips and generally I really like them too for having some features in their flagship model but not asking for flagship price.

Not to be outdone, ASUS is also coming out with the Intel ATOM based Smartphones called the Zenfone 4, 5 & 6 (the number denote the screen size and higher specs) at a very attractive price (estimate using IDR) at S$200, S$250 and S$330. I am testing the 5 now and generally it is not bad, a tad slower perhaps the 2xDuo Core and program language translation took some toll. Again it is not so slow that it will pull your hair out and at the price, one can’t really complain. Imagine having a 6 incher Phablet at $330.00. Oh yes, it has SD card slot and Dual 3G SIM card slot too (that’s better than Redmi’s 3G+2G slot)!!

Yes there are cheap phones but reaction I have gathered is – ONLY 3G? Bro…we are in 4G age leh!! Still use 3G??

Now let me give you some realistic, practical advice.

Do everyone have 4G connection in Singapore every time, any where? And even if you do have 4G connection, do you have the fastest connection? Even if you have full 3G/4G connection do you still have slow load up using the browser? So are we paying the best money can buy when it comes to 4G knowing that we didn’t have it every time and we don’t get the maximum speed? So why do we need 4G then as we aren’t enjoying it 100% of the time?

And since these are basically designed to be used overseas, count how many ASEAN countries that we usually visit has mature LTE/4G network? I foresee that it will still take sometime for them to roll it all out eventually and by that time, the budget phones would have LTE built-in then.

Judging from the trends, just give it a year at most 2 for the budget phones to come with LTE enabled. For Xiaomi to survive in the global market, it has to come out with LTE phones soon. And once that happens, the rest will follow suit. Or better if someone read this article, the brands will leapfrog Xiaomi and give us a 4G budget phone!! That would be great!

All these talk about budget phones and non-recontracting won’t have happened if the Telcos are more mindful of their pricing regime.

So in Singapore you have a bill that only talks about the mobile phone service. There’s no way you can see how much subsidy the Telco has been paying for the phone you have bought when you re-contract.

There are two ways of seeing this. I may be wrong but take it with a bowl of salt yes?

You will pay around SGD40 for 100min talk time with 800SMS (in this age of Whatsapp?? Hello?!!) and of course 2GB of local data usage. So usually this plan would attract the 2nd most expensive price if you want a new phone.

So let’s say you want Xperia Z2 at $568 (based on Singtelshop as of 14 May 2014) using the lite plan that has the 2GB plan as above. The retail price of the local phone with full warranty is around $845 (based on mobilesquare.com) So naturally you’d think you are saving $200 plus based on subsidy.

But there are things you should consider – bulk purchase and discounts. So would the $200 can be part of the discount instead of subsidy? If it is so, wouldn’t that $568 is the actual price you pay for the phone and you got a discount because the Telco help you to get a deal buying bulk?

How about the other end of the spectrum, paying S$239.90 under the prestige plan that has 12GB? That’s simple. If last time one pays SGD40 can get 12GB, and have to pay 6 times as much to enjoy the same now, the price difference would have covered the cost of the phone pretty quickly, more so with bulk purchase and discounts.

Let’s say the bill do have the amount of SGD200.00 we have to repay to the Telco and over 21 months (the length one have to stay with the Telco in order to recontract again), it is around SGD10.00 per month only.

But have you realised that after the 21st month, our bill still stays at SGD40 without any rebates at all? So why are we paying extra SGD10.00 for? CPF? (HA!). With that in mind, the only conclusion is that the price we have paid upfront while recontracting is the price that is being sold to the Telcos at a discount since our bill didn’t go down even after we paid off our ‘debt’.

If the bills that we paid is clearly showing on how much subsidy we are given and how much we have to pay, we wouldn’t need to guess so much. I wonder what’s the deal with opaque-transparency in Singapore. If it clearly spells it out, no one needs to second guess each other.

So all in, my conclusion is to pay the extra SGD10.00 in order for me to enjoy my additional 10GB of mobile data.

What will happen to the top end Smartphone such as the HTC One M8 and Samsung S5? I guess there will still be people who will be buying them, making the decision that they will be using the function and features more and willing to pay the premium for it.

I really love the HTC One M8 and ASUS Padfone Infinity aluminium unibody construction, forgoing the battery for some sleekness. However physical attributes aside, all the software can be emulated since most of them resides in the Android platform. And most of the time I won’t use all the bells and whistles that comes with the phones.

In the end when it comes to practicality it is always good to have “function over frills” mentality.

Why pay more for frills when you don’t really need it? Of course the definition of frills is different for everyone. Someone may like their heart being monitored since they have some health problems or they are chronic worriers (as opposed to warriors) about their state of health (oxymoronic in some ways). Or some would love their phone so much as to bring it to the shower with them or make a call while they are diving…yup…there are adventurous people no doubt about it.

How about the cameras you’d ask… I still stick to my original intent of getting a Smartphone. It is a phone first, an Internet content device second and very far third, a dedicated camera. That said, the cameras that are in the phones nowadays are more than enough to take everyday snap shot. Just take a look at Luffy!! 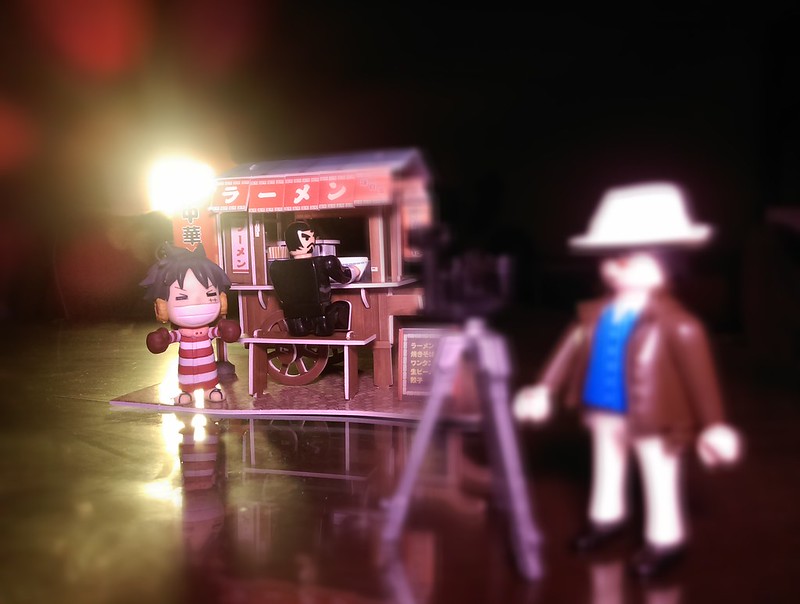 This is taken with the HTC Desire 816 at Macro distance, shot with the help of 2 x LED lamps with yellow filter to recreate a street scene. If it can shoot this well on budget phone, why are people still complaining?

Still not happy? Then what you need is a camera, not a phone.

If you want to read more about the Smartphone round up till now, you can hop on to the Techgoondu article here.

Now you know why I praise God for great budget smartphones now!