(Go West) Life is peaceful there
(Go West) In the open air
(Go West) Baby you and me
(Go West) This is our destiny
(Go West) Sun in wintertime
(Go West) We will do just fine
(Go West) Where the skies are blue
(Go West, this is what we’re gonna do)

So that’s what we did as we left Melbourne to go West and into Geelong and the beyond into the great outdoors that is the Great Ocean Road.

The thing about the Great Ocean Road is listed as an Australian National Heritage built by returning soldiers from the Great War (World War I). The main aim to build the road was to link up all the coastal settlements in the Southern regions of the state and it stretches from Torquay all the way to Warrnambool. The same road passes through Otway National park and the now very famous 12 Apostles; limestone towers along the coast, carved out from cliffs by the incessant slamming of the Southern seas through erosion.

The visit turns out to be a great with the sun shining (the song’s lyric says it all!!) and the clouds with blue skies moving along with the wind across the landscape. What’s more we are treated to a helicopter ride by the 12 Apostles Helicopters, to view the Apostles. Actually the towers where originally named the Sow and the Piglets (farming community you know?) but it wouldn’t look good on tourism brochures and was renamed with the more respectable 12 Apostles.

The thing is there isn’t 12 Apostles and one major stack collapsed 5 years ago that left only 7 during my absence.

We visited quite a number of places including Colac Town, where we normally would rest before going on to Warrnambool. There are also the Bay of Islands and London bridge that hug the coast too, providing spectacular views. 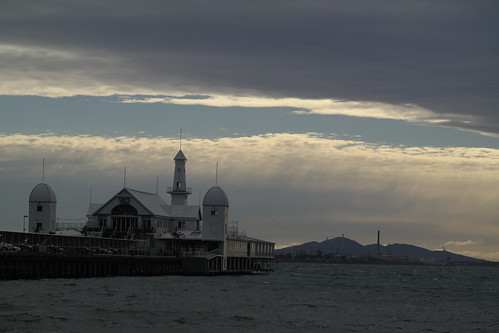 Cunningham Pier at Geelong with rain pelting. The day did started out a bit gloomy but improved later. The last time I visited Geelong was in 2000 where Ruth graduated at Deakin University. It was windy then as it was the day I visited.

There were many of these bollard sculptures littered around the Geelong town, they speak of the history of the area. The time spent here was pretty limited unfortunately and the rainy weather halted the plan to explore the waterfront. Above are the famous lifesavers (or life guards as we call them). 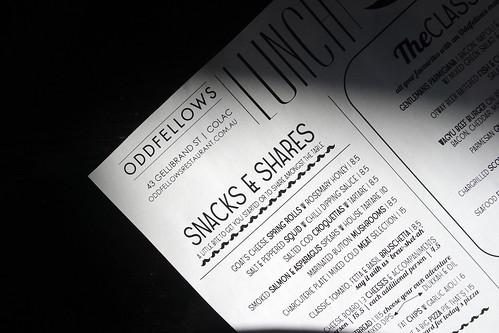 The Oddfellows of Colac is where we had our lunch. Superb spread of fusion cuisines. Worth a stop by. 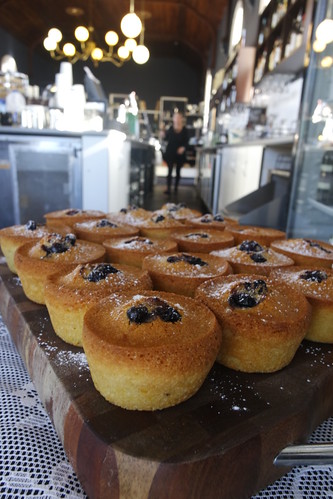 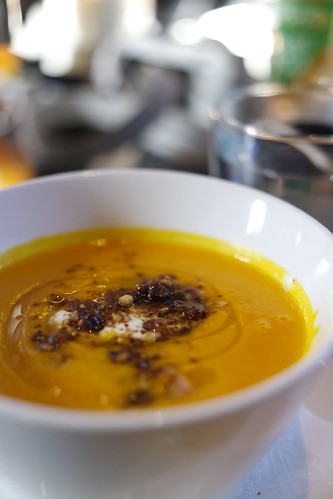 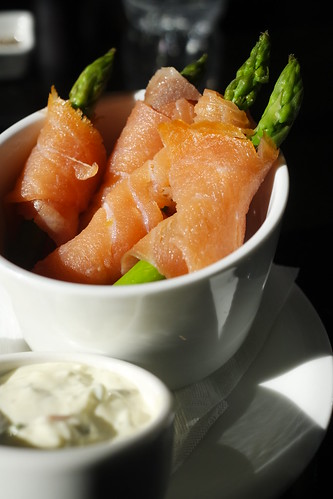 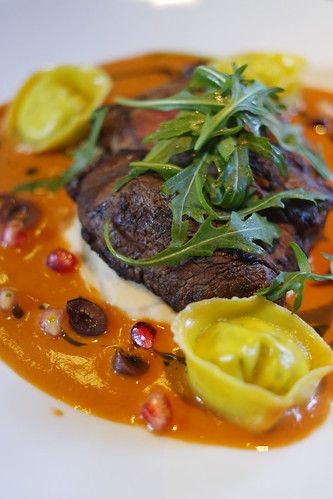 Had the lamb with pasta. 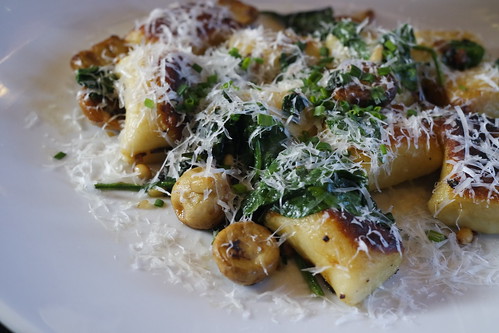 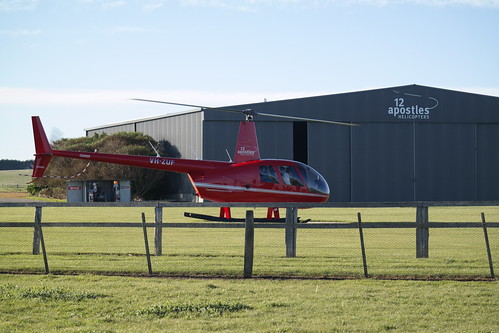 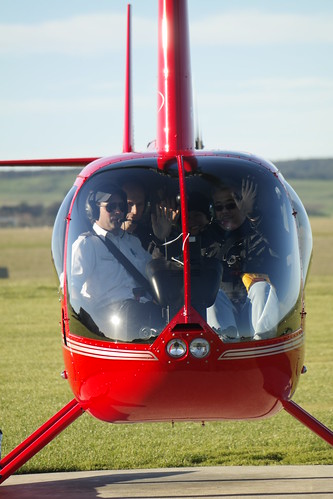 The 12 Apostles Helicopters service takes us to the skies to have a look at the coast from up high. A perspective well worth the money (well they say time’s short when you have tons of fun). 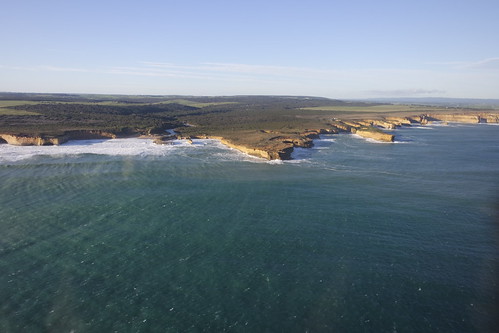 Magnificent view of the southern coast. 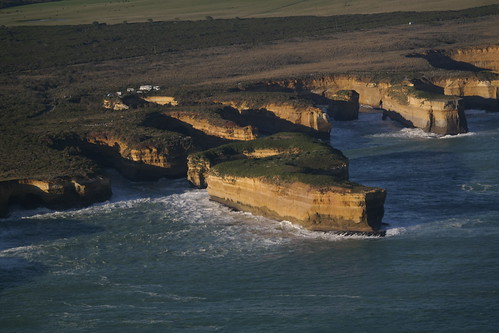 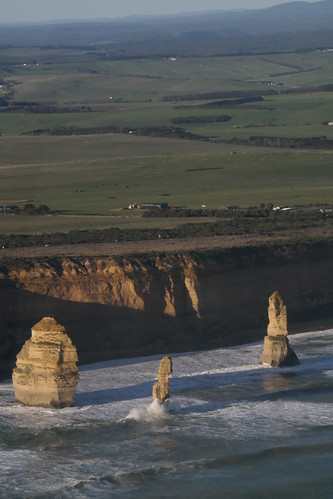 The stacks slowly formed as the erosion takes place. 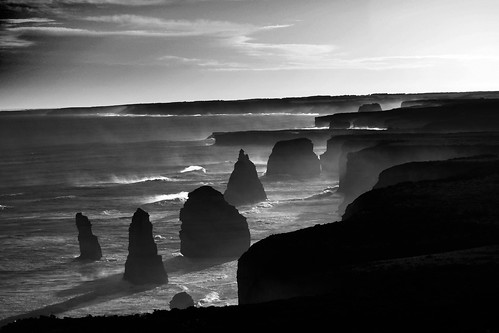 A Silhouette shot of the 12 Apostles at Sun down. Converted to black and white and dodge the skies to bring out the cloud details. Sharpen to bring out the sharp edges of the stacks. Contrast added that allowed the sea fumes/sprays enveloping the coast to be seen.

The view of one of the stacks during Sunset over at Gibson’s steps. A pity we can’t go down due to the wet weather (what wet weather??). 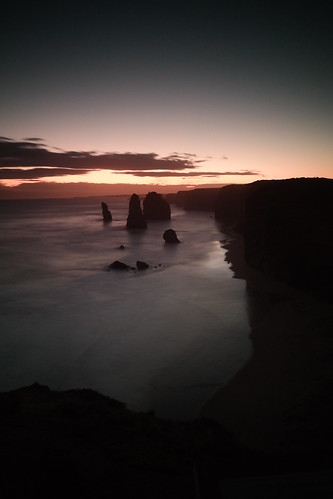 The ‘official’ view of the 12 Apostles over at the visitor centre. Note the lumps of rocks in front? That used to be another stack standing when I first visited the area in 1998 (there wasn’t a visitor centre to escape the biting cold wind then). Have a look at the sunset time lapse sequence below. Shot with Samsung Galaxy K Zoom with Time Lapse App. 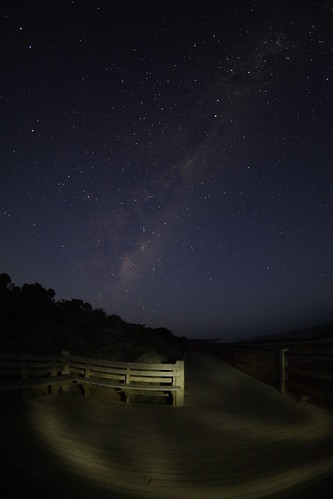 When the sun sets without much light around (the Great Ocean Road is pretty dark in general), that’s the best time to hunt down the milky way. The shot above was actually a last minute thing as the rest of the group was waiting inside the bus after the sun sets.

Was wondering where the milky way was so I just took out the Galaxy K zoom, fired up the Star hunting app and then was given the direction of the milky way (look for Scorpio constellation). So I turned the camera around from shooting sunset, set it up to ISO 1600, 30s on shutter speed and open the aperture as wide as I can (f3.5 as that is the lowest the fish eye lens can go). Did some checks and then realised need some foreground so I did some light painting and the result is the winning shot above (yes got a prize for this shot).  No post editing since I need to show how the NX cameras are performing.

The sun rise over the Bay of Islands Coastal Park in the morning after a stop by at Lady Bay Resort. 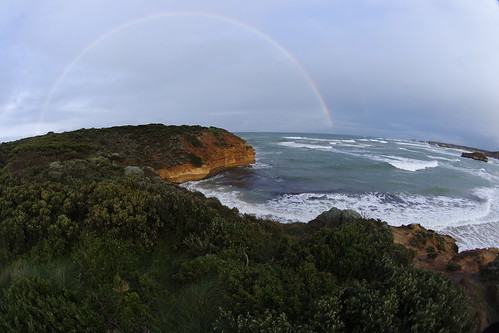 The awesome full rainbow greeted us as the sun slowly rose from it slumber. Funny that I actually watch ‘Noah’ (not biblical accurate since there was no rainbow shown in the movie) on my way from Singapore. 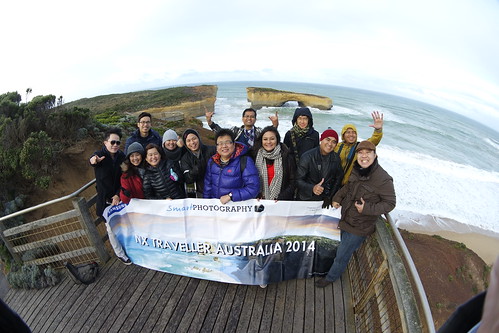 We were at London Bridge (used to have 2 bridges where tourists are able to cross). Yeah I know a “Wish You Were Here” banner would suffice here (LOL!! I know..some would grumble) but the Samsung banner did well too (shot by Tony). 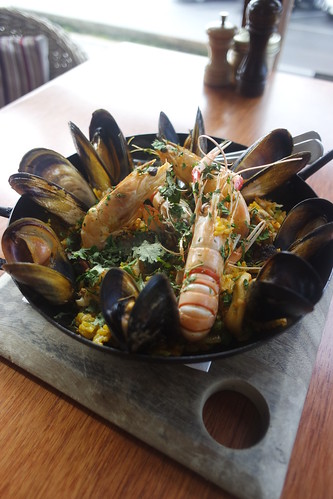 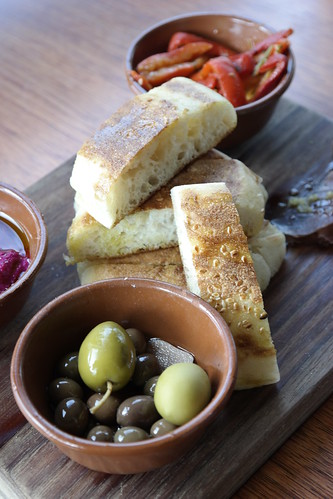 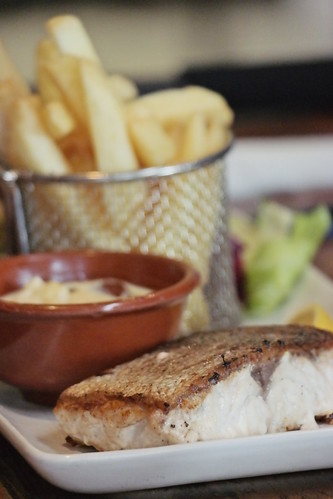 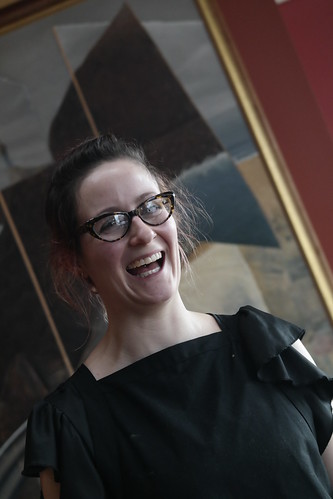 Our lunch over a La Bimba, Apollo Bay with our super jovial waitress. 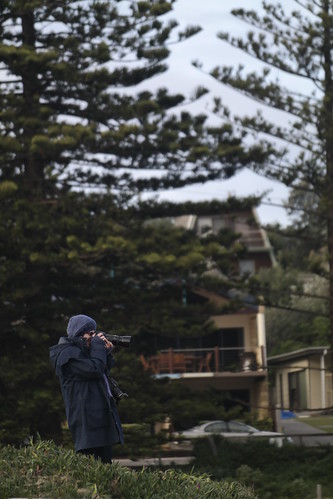 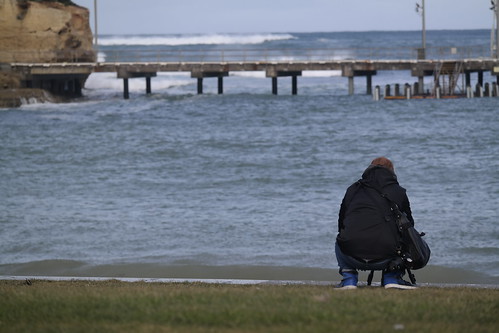 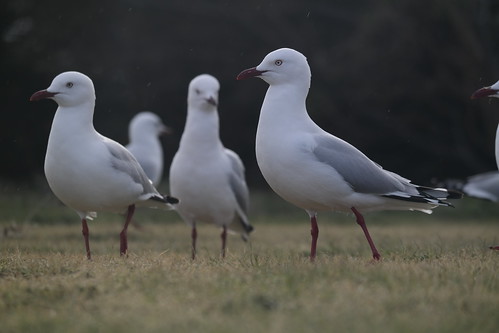 Did some shooting at Port Campbell as well. 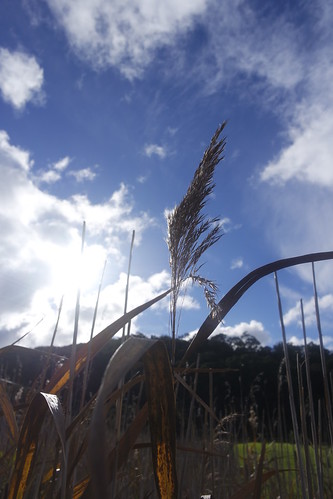 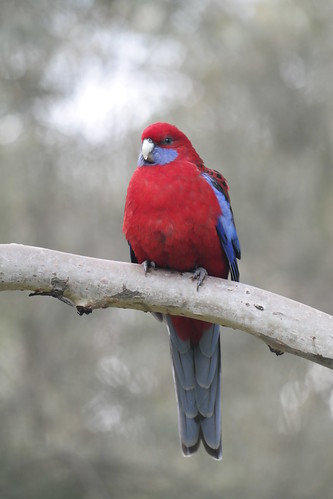 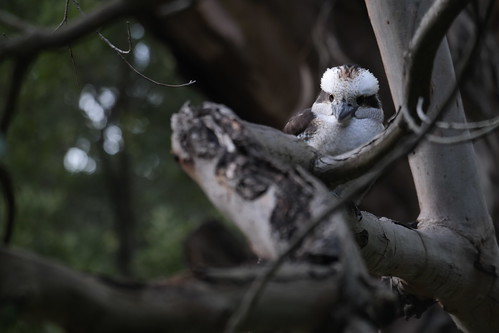 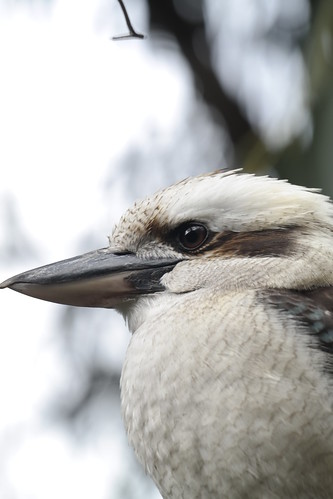 If you are interested to shoot wild birds such as the Crimson Rosella, Kookaburra and Koalas then hop on down to Kennett River. 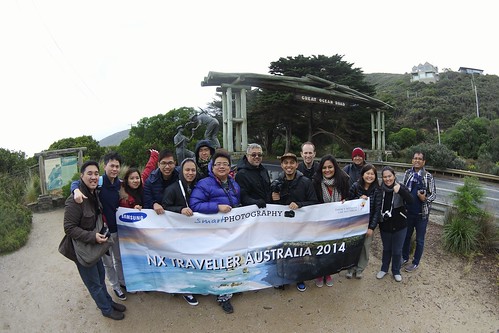 After an exhilarating trip to the West, we then make our way to Queenscliff to catch the Searoad Ferries in order for us to cross the mouth of the Port Phillip bay into Sorrento and the Mornington Peninsular, another area of Victoria worth exploring.