Slowly but surely the Bluetooth technology for music is coming back to the fore. From my review of the NAD D3020, the AptX bluetooth (BT) is something that aims to improve on the audio using wireless audio codec without losing too much data. The unfortunate thing is that it still supports the older Advance Audio Distribution Profile (A2DP) codec so it is not producing what the best wireless technology has to offer.

The fact remains is that when anything to do with wireless, it will degrade no matter what one says. The best is still wired when the data is streamed for audio and visual use especially with hi definition sources. It is not as crucial for other forms of data that’s why surfing the Internet wirelessly is still not that bad.

That said, apart from a slight loss of bass, perhaps due to the small power source of the BT module, the overall enjoyment of music was not overly compromised. In fact the vocals and mid details didn’t degrade to the point it is discernible.

But one thing did suffer – the sound stage. The BT has shrunk the sound stage down to the point between the eyes and not really towards the ears. I guess the codec has drop data to the point that the vocals are retained but secondary parts of the audio are dropped.

Going by the use for the AE2W, where commuting entertainment is the main use with all the ambient noise then this headphones has done its job well enough to bring it along.

Wait a minute, isn’t the headphones looked exactly like the wired version of the AE2W?? Yes it does. So I pulled out the plug on my own AE2 and then took out the BT module from the AE2W and….wah la!…it fits perfectly!! 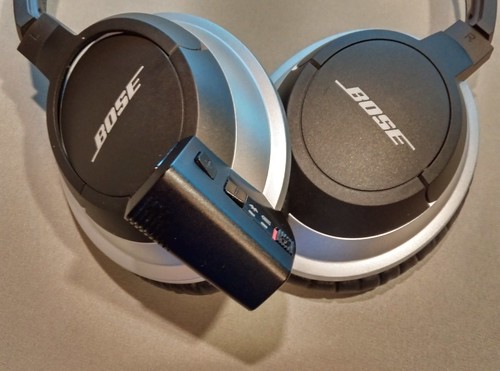 So this is how it goes. The silver/black AE2 fits like hands to glove with the Bluetooth Module.

So what really happened is that has come out with a very ingenious way to wireless the AE2 headphones without retooling the production for the headphones itself. Both have TriPort that helps to produce the wide ranging sound and for all intents and purposes, they sound identical as far as my ears are concerned.

Well would the BT module be useful? Unless you loathe the existence of wires then the BT module is really a god-sent. But is the BT Module good enough for your ears to replace mid range Hi-Fi experience? For me I will still go wired for my musical enjoyment for the very reason that the sound stage is much wider as a result.

But convenience do have its place and wireless do make it easier for one to do work or transit without the wires accidentally being hooked by unsuspecting people or toppling stuff off tables.

So is there any way for AE2 owners to get the BT module alone without getting the whole set? Looking at the website there’s no such option. Perhaps this is something Bose and its local distributor Atlas can look into and perhaps make it cheaper for AE2 owners to go wireless.