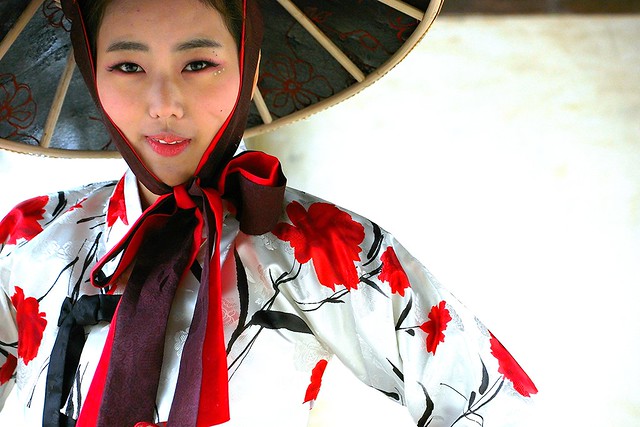 The relentless rain followed us to the third day in Korea when we set out to visit the Korean Folk Village. At 243 acres, the huge compound is set in a forested area with a river running through the middle of the village. In one corner is a fairly modern looking buildings that houses some entertainment mainly for kids but for the history and landscape buffs, the rest of the village is a treasure trove waiting to be discovered.

Designed around the architecture of the late Joseon Dynasty, it shows the various types of houses ranging from the farmer’s hut, a rich landowner’s home, the local government’s office to a noble man’s home. To immerse in the local culture, there are also drum performance by the ‘Farmers’, a traditional wedding ceremony, dances and acrobatics. No thanks to the rain, most of the performances have to be cancelled but that doesn’t mean there are no interesting things to shoot.

Doing my round in the wet, there are beautiful landscapes to take in. There are also staff of the village walking around in traditional costumes, even a fierce looking (or is it bored looking) governor sitting at the entrance of the government house. There is also Ajumma preparing fire to get the kitchen going. It feels pretty authentic actually (except for the obvious name badges they are wearing).

This is a place worthy of at least a day of slow and steady exploring and judging by the trees in the area, Autumn would be the perfect time to visit this place.

Opened in 1976, it is the Korean version of Universal/Disneyland theme parks. As you would expect there are multiple joy rides and colourful themed environments that the kids would totally love. So where are we here? There’s a tulip festival going on and the Cherry Blossoms here is quite plentiful. As the park is situated in a valley, imagine both sides of the valley covered with blossoms. Add that to the tulips, flower lovers would adore this place.

Apart from the rides, I would say the Safari and Lost Valley rides are unique in itself. It is not exactly like a zoo where you could walk and appreciate the animals but we are basically transported around the enclosures in buses. I have experienced the Safari ride the first time I was here and was glad that I was ushered to try the newer ride – Lost Valley. The experience was a tad underwhelming for me because the animals you see are giraffes, elephants, liger (lion+tiger), cheetah and some mountain goats/rams. On the positive side at least you can get some decent shots with a simple consumer grade 200mm zoom lens but on the other hand, I think I would spend a bit more time at the Folk Village.

Still, depending on the purpose of the trip, Everland would be a bit more fun if one arrives around 3pm and stayed until it closes so one can see the place both in day and night time. It is pretty at night with the lights being switched on so this is something to consider.