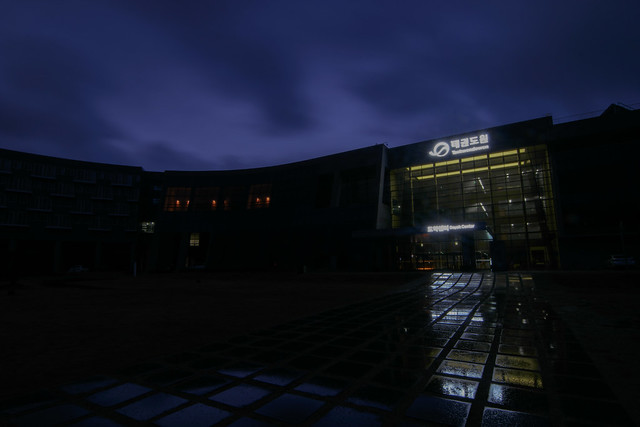 If there’s ever a University for a sport, Taekwondowon is that University for Taekwondo. The whole place is certainly impressive as there are hostel accommodation, a museum, a Taekwondo experience centre and of course an arena for sparing. I would even say those who are practicing Taekwondo so do a stinct at this place.

There is also the Taekwondowon observatory at the peak of the mountain just behind the institute. As the monorail was not in operation, we did our own training of mind through physical activity by climbing the mountain. Poor me, I actually did it twice, trekking up the mountain in the early morning in search of sunrise despite the rain and again when the rest of the group later in the morning.

After the climb we are treated to a Taekwondo demonstration by the masters (I think) of Taekwondowon. The Audience is just us so it must be a special performance. Then again, they still put in heart and soul into the demonstration and with the Samsung NX1’s capabilities, I was able to capture some of the most spectacular action sequence of this sport discipline. Many thanks for the effort!

More immersing into the Korean culture and the best way is through the food and the paper it seems. Famous in the area is the Bibimbap and we get to DIY the whole experience. After lunch, we did some art and crafts including making a piece of Hanji. The thing we just do the ‘containing’ portion of a much labourious process which is to strain wood fibre through a screen and that allows the fibre to stick together and combine into a thin piece of Hanji paper. It is an experience which I wish could be done in a traditional setting rather than a factory floor sort of art studio but modern machinery such as a vacuum machine that sucks the water out of the paper and an electric dryer make it much quicker to finish the process.

“The manufacturing process of Korean paper is complicated, slow and laborious. The dry mulberry is cut after the frost has arrived and is peeled off after steaming. It is immersed in water for one day and, after being dried under the sunlight, the bark is peeled off, steamed again inside an iron pot and immersed in caustic soda. The steamed bark is smashed inside a stone mortar after the water has been squeezed out. Then it is rinsed in flowing water after being placed inside a wrapper. The washed mulberry is mixed with water and a natural adhesive. Next, the fibers are strained through a bamboo screen, which is shaken back and forth to create a crisscross pattern of fibers. The pulp is then dried by stacking it on a wooden panel and placed in the sun, completing the process.”

So we are basically started from the ‘bamboo screen’ step of straining.

We continued on this Korean Cultural immersion program by visiting the Jeonju Hanok Village. ‘Hanok’  literally means Korean traditional houses and having a ‘village’ means a lot of these houses together in one geographical location.  The Hanok Village is like the Korean city dwellings and people of Jeonju actually stays in them too. What we have is an eclectic mix of old and new being together and create a rather unique atmosphere. In short Jeonju Hanok Village is street photography heaven with street food, small stalls and cute coffee outlets being housed in these old houses (or new houses made to look old). What’s more, the Koreans actually rent or brought their own Hanbok (Korean traditional costumes) and walked around in Jeonju for shoots. Basically it feels rather interesting that you can take couples and groups of girls in Hanbok as though you are walking through a movie set! This place is a must go!