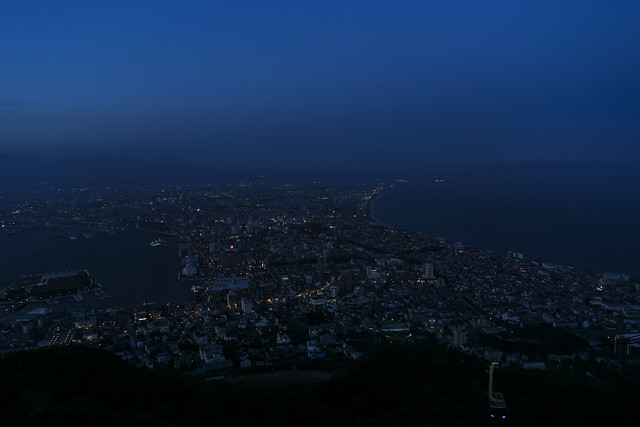 After travelling on the boat for a full day and night and stuffing ourselves silly with food, it is good to get out of the boat and exercise our legs. Today we arrived at Hakodate (函館, used to be 箱館）Hokkaido’s third largest city.  Located at the island’s southern tip. Hakodate is best known for the spectacular views to be enjoyed from Mount Hakodate and its delicious, fresh seafood.

As one of the first Japanese harbor cities to be opened to international trade after the country’s era of isolation, Hakodate has experienced notable influence from overseas, and the foreign population’s former residential district and a Western style fort are among its main tourist attractions. (taken from http://www.japan-guide.com/e/e5350.html)

Upon arrival we took the shuttle bus from the ship to the city centre and Japan Railway’s main terminal for the city. To get around the city, one could buy the bus and tram season pass. I personally would say the tram pass is more than sufficient to get one around the city without much problems. Just get to the tourist information centre just at the entrance of the train station and you can buy the bus and tram passes. Walking in Hakodate is not difficult too with a map in hand.

Our first stop is the morning fish market with the fresh sea food on sale which is just next to the place we alighted from the bus. As we arrived at Hakodate close to mid-day, it is the perfect place to get our Ramen lunch.

Fort Goryokaku (五稜郭) is one of a few star shaped fort that exists around the world to protect the city from invading western powers. It is also the site of a civil war between the army of the new Meiji government and the remnants of the shogunate army.

In the centre of the fort is the Magistrate office where Hokkaido is administered. Part of the building is reconstructed. To see the whole site, the only way is to go up to the observation Goryokaku Tower is located nearby.

We then make our way back to Motomachi, a suburb of Hakodate where foreign traders from China, Russia and Western countries used to live. That explains the myriad of churches and western styled architecture littering the area. As the area is on the slope it immediately reminds me of San Francisco too. There are the Russian Orthodox Church, Chinese Memorial Hall and the old Hakodate Publick Hall. Generally a very nice place to wander around just before making my way up to Mount Hakodate to take in the evening view of the city nightscape (the picture right at the start of this blog post).

You can view the dusk scene time lapse sequence below

Next Stop: Akita with Canon 760D