Travel Thru’ The Lens: Summer Fun in Korea

Most of the time we would visit temperate countries such as Europe, America, China and Japan during the spring or Autumn months because the weather is cooler and that helps when we are out and about exploring the place. Granted that we would want to escape the heat of Singapore as and when possible, more so when you have to spend money to enjoy your trip but that would also mean that we won’t be able to see a side of the country during the less popular months.

So when there’s an invitation by Korean Tourism Office (KTO) to check things out during the summer months, I decided to go despite having an aversion towards heat as I perspire a lot. There’s also another reason to do this trip because of the need to show people that MERS epidemic in the news has blown out of proportion no thanks to the Kiasi characteristics of Singaporeans.  Of course it is good to look out possible dangers when out and about in other countries but somehow I feel the fear has got a bit out of hand.

I chose to go with a more positive attitude, perhaps a bit more sanguine in retrospect, as I join Carolynn, Celine, Germaine and Dina on our little trip. through Korea.

This is a bit different from the trip I have done with Samsung for the NX Traveller Program that has happened in April (you can read more about it here) in that we are doing it from a free independent traveller (FIT) point of view.   So for part of the trip we we’ll be using K Shuttle to travel to the country side of Korea. More on that in my next post.

We reached Seoul on Asiana in the early morning and took the airport transfer train to Seoul Central Station where Hotel Manu, the place we are staying is just minutes away. The good thing about having Seoul Station right next to the hotel is definitely the convenience. The train network all congregate here so going any place in and around Seoul is really a matter of minutes. What’s more Namdaemun market is just right next door to the hotel too but the girls love to go straight to Myeongdong for some shopping but first there’s this new place called Common Ground that is the darling of a lot of the fashion conscious young people that we would like to visit. 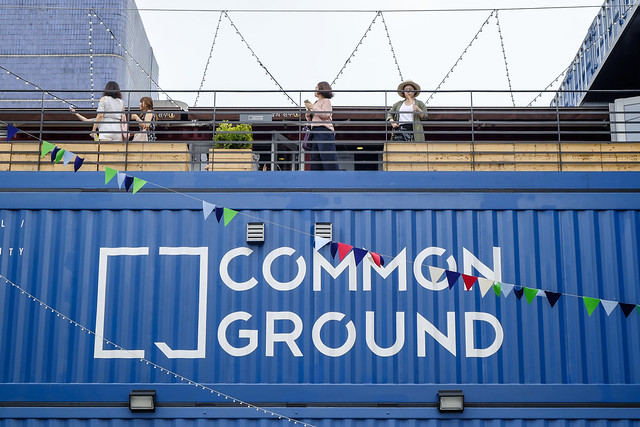 From Trazy.com: “Common Ground is Korea’s first and World’s largest Pop-up Container Shopping Mall located nearby Konkuk University station in Seoul.  The first and second floors are mainly comprised of hip stores and shops while the third floor is filled with trendy restaurants with terraces. About 200 blue colored fashion & lifestyle/ food & beverage containers give a unique experience to the customers. There are also food trucks in the central area (so-called market ground) that’s surrounded by the containers. A variety of markets are held in the market ground every weekend.”

Well quite honestly I find the container based architecture somewhat interesting and I can see why it is a great place to do some instagramming. This is a place brimming with corners and backdrops that any blogshop owner would love to showcase their wares through pictures. Although from the outside it is covered with shipping containers, it is basically the ‘skin’ of the building and inside you can be assured that you are not shopping in some shabby corner of town inside an apocolyptic . To reach here just take the Green Line train to Konkuk University Station and use Exit 6. 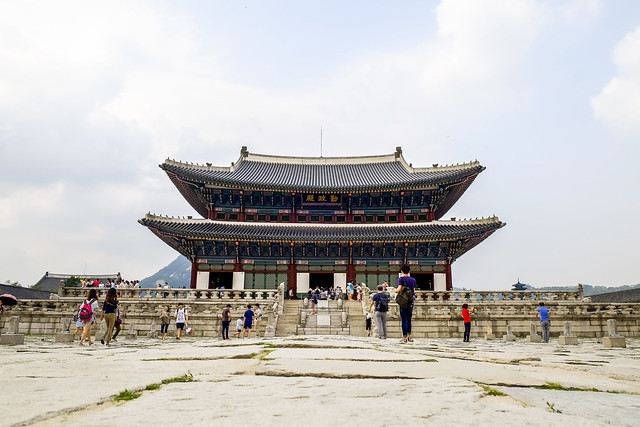 This is the main palace ground of Seoul and from its sheer size one would definitely know. I didn’t really visit this palace during my last trips because we just loiter around Gwanghuamun, which is the main gate of the whole palace. So I followed the girls to have some fun checking out the place and do some cos-playing.

“Myeong-dong is one of the busiest places in Seoul and is among Korea’s premier shopping destinations. Over 1 million shoppers pass through this area each and every day. Located in the heart of Seoul, Myeong-dong market has been a witness to Korea’s tumultuous modern-day history as a center of city politics, economy, and culture. To international visitors, Myeong-dong is a stunning shopping district with countless shops and restaurants. Its wild popularity has led to similar shopping districts springing up all across the country.”

Myeong-dong is cosmetics heaven but for foodies there are some good food here too where I was introduced to the Andong Braised Chicken Stew or Andong Jjimdak (recipe) when we meet the girls for dinner after the visit to the palace.

After a long day of exploring Seoul it is time to rest and look forward to the tour with K Shuttle.

Note: All comments in notation are taken from visitkorea.or.kr unless otherwise stated