Travel Thru’ The Lens: Summer in Korea Part 2 with K-Shuttle

Hitching A Ride with K Shuttle

If you happened to be in Korea without a tour group, taking the K-Shuttle service might be an option. The K-Shuttle is a round Korea tour program that includes transportation, accommodation and an English speaking guide (our guide was Justin who can basically sing most of the National Anthems of football nations as he is an ardent football fan). The “hop-on, hop-off” program does allows you to break away from the standard itinerary and you can stay in one place longer and then get on the bus when you want to continue on the journey. I think the K-Shuttle’s excellent introductory video to the places we are visiting will give a good overview of what they can offer.

So here are the major places we are going to visit

Of course along the way we will be going some smaller towns and check out the fortresses and museums. Here’s the route we have went through during the trip.

Hitching A Ride with K Shuttle

After a good night’s rest, we started our journey by meeting up with the K-Shuttle crew over at one of the buildings beside Gwanghuamun Square which is right in front of the Gwanghuamun Gate. Justin quickly got us acquainted about the tour and proceed to the next destination: King Muryeong’s Tomb. 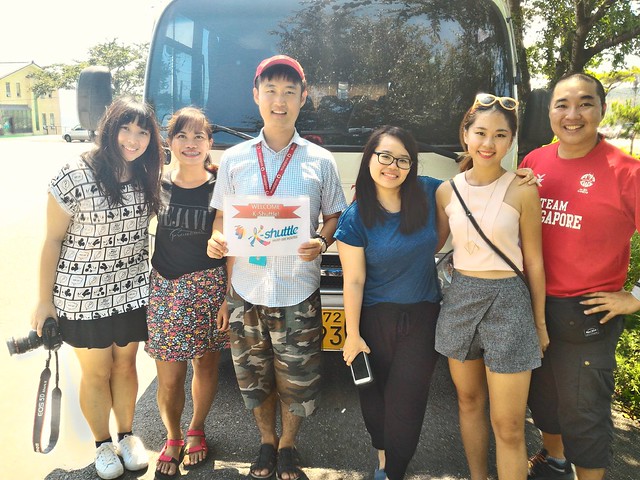 King Muryeong of the Bakjae Kingdom (18BC – 660AD) one of Korea’s three Kingdoms. When one mentions three kingdoms, automatically we would remember the Chinese version of the 3 Kingdoms and unbeknownst to most, Korea has its own too: Baekje, Goguryeo and Silla. King Muryeong is one of the Baekje Kings and its tomb was exhumed and now displayed in a museum. We then go on to Gongju which was used to be call Ungjin, the capital city of the Baekje Kingdom and visited the Gongsanseong Fortress. 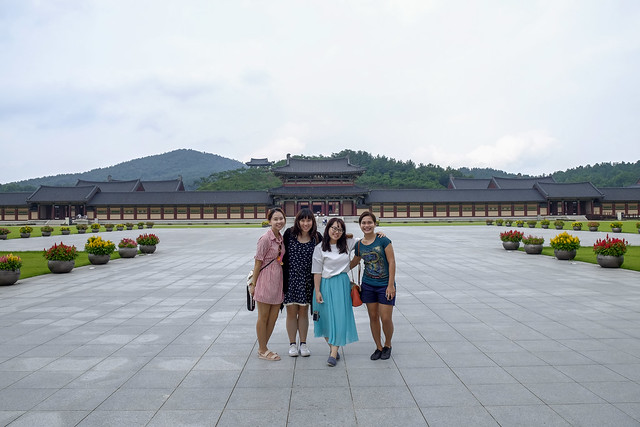 The fascination with Baekje continues with the visit to the Baekje Cultural Land, a reconstruction of the architecture of the Baekje era and there’s a museum dedicated to showcasing this Kingdom’s culture too. The whole place is designed as a huge TV serial production set.  The place has even become a tourist attraction of sorts even with a factory outlet and a hotel just next door. 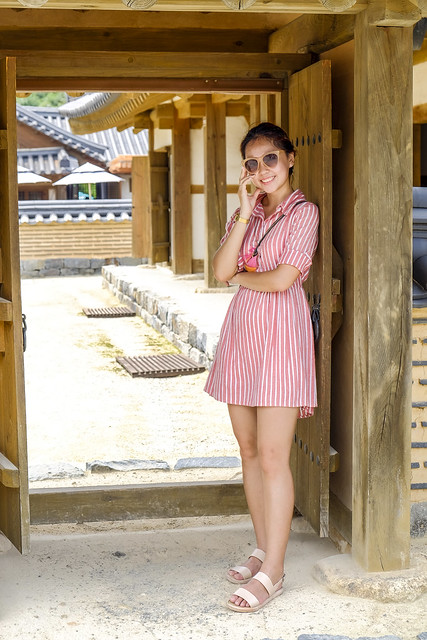 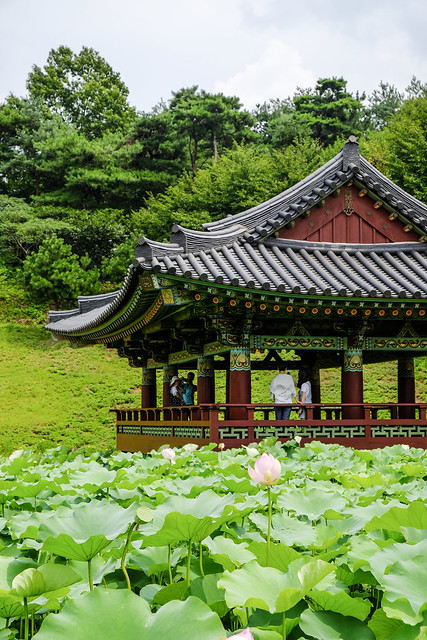 “Nakhwaam is a rock cliff towering over Baengmagang River in the northern end of Busosan Mountain. According to the legend, this is where the royal court women of Baekje jumped off to kill themselves when the kingdom of Baekje was defeated during the invasion of Sabiseong Fortress (now Busosanseong Fortress in Buyeo) by the Shilla-Tang Alliance. The name of this rock, Nakhwaam, literally means “the cliff of falling flowers” and symbolizes the fidelity and loyalty of Baekje women.”

Baekje history continues in the form of a cliff, that over looks the river. The climb was arduous not made easy by the heavy, humid air of summer as my t-shirt was drenched through and through. But the sight at the top of the Rock with a gentle breeze was very welcoming indeed. Imagine jumping down here after the fortress was breached. Scary thought. After the climb we went back to the bus via a boat ride. 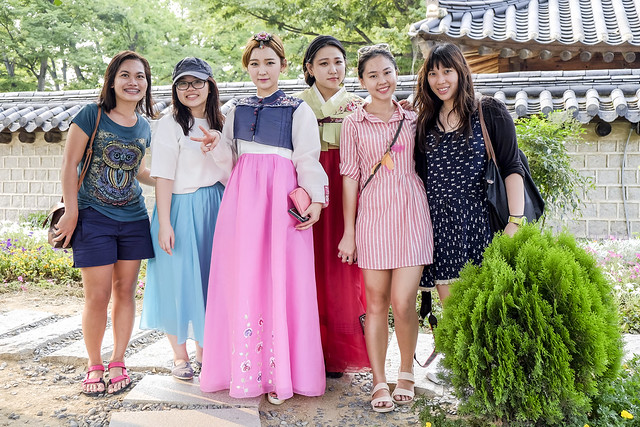 Jeonju Hanok Village is by far one the most successful story between the merging of old architecture and modern business. This is a unique place where the old and new are intermingling successfully, creating a sub-culture not seen in other places in Korea. Not surprisingly since Jeonju is the art centre of Korea.  Here in Jeonju Village you can basically have a field day doing street photography with the locals (and maybe tourists who looked like Koreans) dressing up in the traditional garb called Hanbok. There are the street food which is by far as abundant as those found in Seoul and Busan. A delightful place through and through! It is still my favourite town after I visited this place during NX Traveller program. 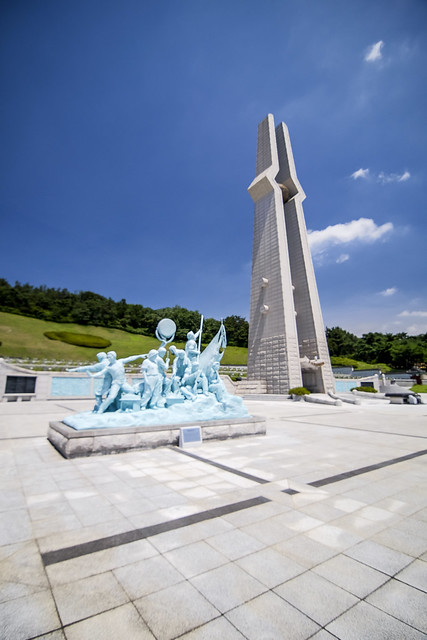 “The 5·18 Memorial Park was established to remember the May 18 Democratization Movement. Covering an area of 204,985㎡, the park houses various historical and cultural facilities, including the 5·18 Library, 5·18 Cultural Center, Education Center, Daedong Plaza, Owoldae Tower, and other memorial sculpture and monuments. The park is also home to Mugaksa Temple and walking paths.”

After a good night rest at the Holiday Inn Hotel, we visited the 5.18 (May 18) Memorial Park that commemorates the brutal crackdown on Demonstrators who are demanding for democratic reforms in Gwangju city but was instead being subdued by the Military rulers then. Without their sacrifice, the democratic system established now would not have happened. 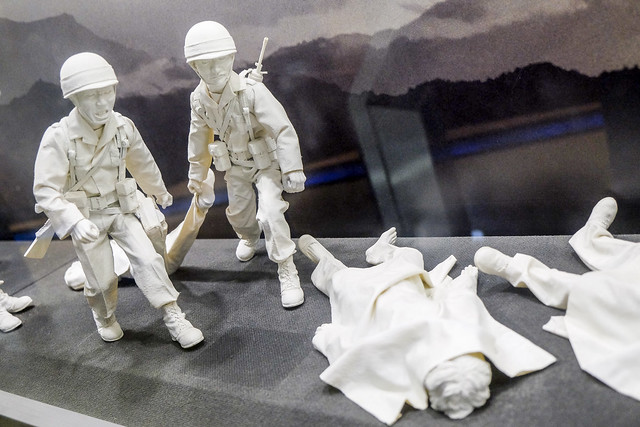 From the Memorial Park we proceeded to Suncheon. During my last visit to Suncheonman Bay (the bay of Reeds) I was really taken in by the natural beauty of the place. This place is also used in 2013 for the International Garden Exposition. In short, Suncheonman Bay is natural whereas the Garden Expo is pretty man made. It has a Telletubby feel to it. This is a place worth visiting in Spring when the weather is a bit more comfortable and the flowers bloom. 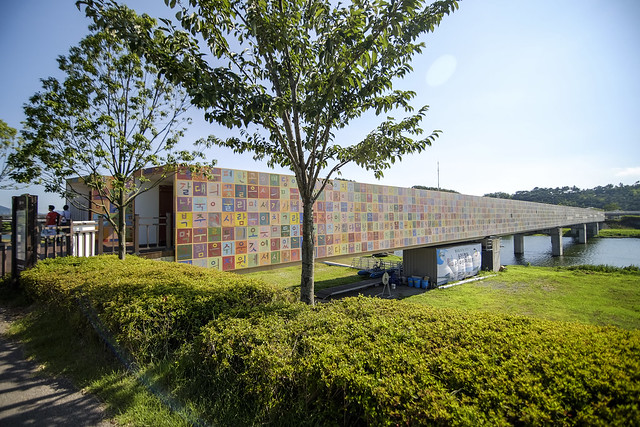 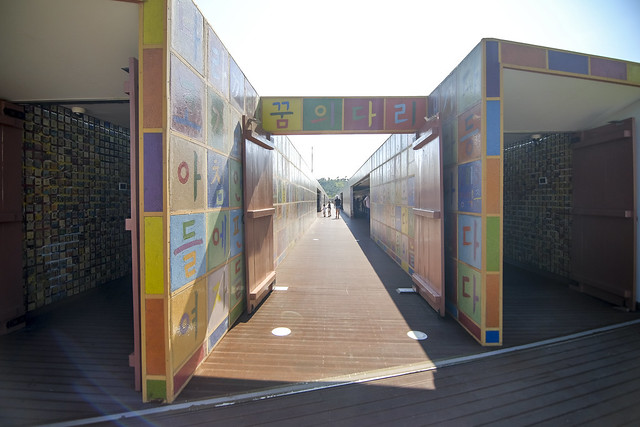 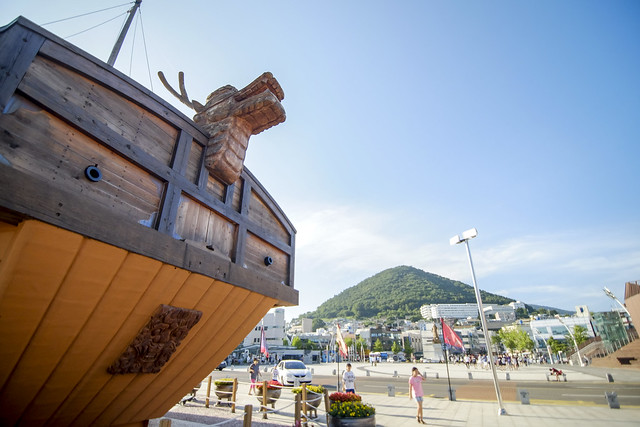 Yeosu is a port city that has hosted the 2012 International Expo. It historical significance lies in its role in the Japanese invasion of Korea 1592-1598 where General Yi Sun-Shin has its naval headquarters. The most endearing symbol of that struggle has to be the turtle ship called Geobukseon. Made entirely of wood but with an iron roof to protect the sailors, the ship along with the rest of the armada managed to over come the Japanese numerical advantage by employing local knowledge of geography, tides and weather.

Seriously they really love the turtle ship to the point they have a full sized replica and even have a festival named after it. Of course the General is also very prominent as his statue is also shown at Guanghuamun Square too.

Yeosu seems to be a pretty nice place to visit as we did some nice railroad peddling and took the cable car over the port. It even have a International Fireworks Competition during the Geobukseon Festival. Something to think about.

“Jinju National Museum is located within Jinju Castle. After opening in 1984, it reopened in 1998 under the name of “Imjin Waeran Specialty Museum”. The exhibits of the museum are based on Imjin Waeran (Japanese Invasion in 1594), instead of having a purely local flavor. Jinju is the site of the greatest battle of Imjin Waeran, the battle of Jinju Castle, which is why there are many relics about the war at the museum,..”

Once you go through the historical significance of the Japanese Invasion and then the colonisation of Korea by Japan in the early 20th Century, it is not tough to see why there is this mistrust towards the Japanese. Jinju was the place where the successfully defended the inner parts of Korea from the Japanese.

This is also the place where Nongae, a Gisang (some what similar to a Geisha who is trained in the arts of music, dancing and poetry) killed a Japanese military leader by holding on to him and jumped into the Namgang River. The name on which she jumped is now called Righteous Rock or Uiam Rock. 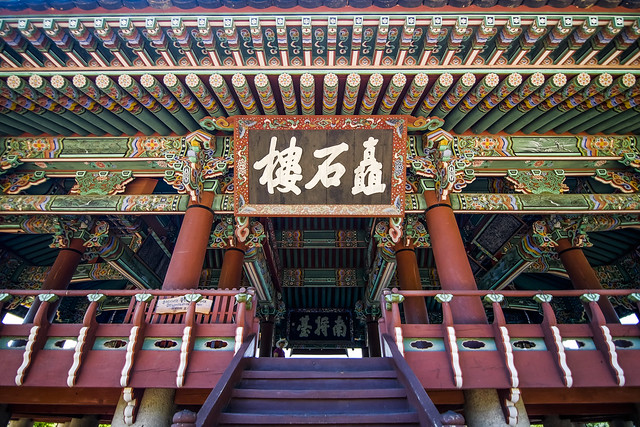 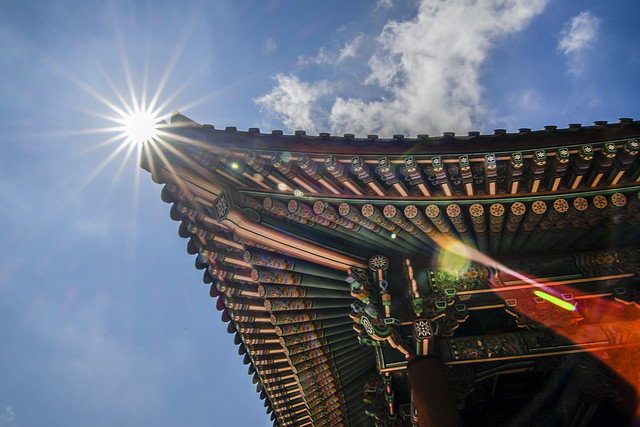 Note: All comments in notation are taken from visitkorea.or.kr unless otherwise stated