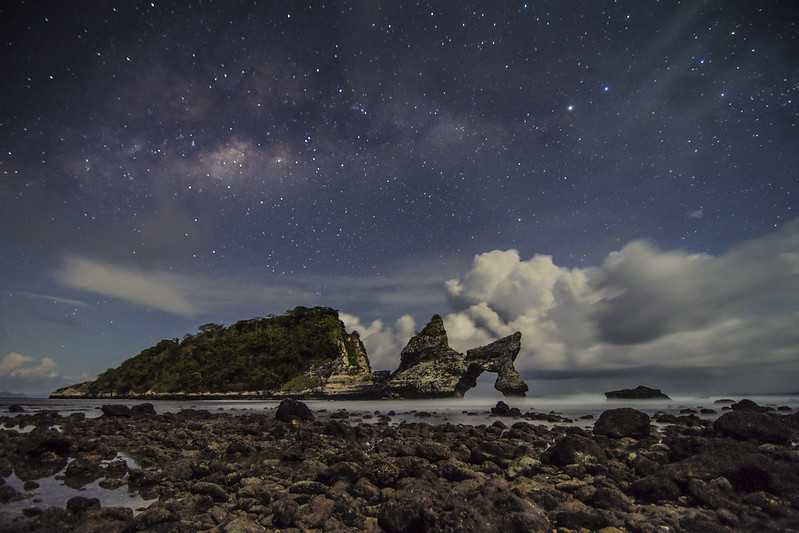 Bali used to be the place we all used to fantasize with its pristine beaches and friendly people. There are a lot of people coming from all over Indonesia too and they are as warm as the locals fortunately. However I can’t really say the same about the beaches and the general surroundings.

Kind of feel that the whole place is turned into a tourism island much like Sentosa. Good thing it still retained some of its original charms but you kept wondering if things are overly done much. An example I can talk about is Ubud.

Just over a decade ago, I stayed at Nusa Dua and made a trip to Ubud. I thoroughly enjoy the small village then with a handful of rustic and yet tastefully done cafes where I can enjoy the local coffee (power!!) and the authentic Goreng Bebek or Babi Guling. But this has overtaken by rows of shophouses that caters to tourists during my previous visit perhaps thanks (or no thanks) to Julia Robert’s movie “Eat, Pray, Love”. Oh how I miss the old Ubud!

Well I think I have found a bit of the old Ubud in the form of Nusa Penida. The island is about 30 minutes by boat from Sanur beach. There is generally a few places to go in Penida but the Eastern side of the Island is the toughest to go as compared to say Angel Billabong/Broken Beach or Crystal Bay. So I made the decision to go to Sampalan Village where it is easier to make a day trip to the East.

I have only a full day’s worth of visiting Penida. I know I should have stretched it a bit more given that I have business with Montigo Resorts Bali over at Seminyak. Still I do not want to overstay my welcome so this is it: 3 days 2 nights at Penida.

So here’s my itinerary. We will make our way towards the East and will come to the Cave Temple of Penida. Then we will go to the flowing hills which the local called it Bukit Teletubbies before going to the beaches. I stayed at Atuh Beach towards the end of the day to capture the rock outcrop formed by  powerful waves and hope to capture the milkyway for it (the timing was right and the moon will be at the same location with the sun).

How I get to Penida – Sanur to Sampalan

Pretty easy in fact. Just get yourself to Sanur beach and when you reached, the taxi should drop you just outside the Grand Bali Beach main entrance along Jalan Hang Tuah. No fret, just go towards the end of the road and you will reach the beach and then turn left. Keep going forward until you reach the Mola Mola Express hut with a small counter and buy your ticket. Just follow the crowd to the boat when you see it docking.

Nusa Garden Bungalow and the Surroundings

If you would want to experience the authentic Balinese culture and way of life, then having high class luxurious accommodation shouldn’t be at the top of your agenda. That being said, Nusa Garden Bungalow at Sampalan, a local abode run by Ukranian Artem and his family is not that bad at all. It is clean by local standards with attached toilet, simple beds and a fan. Having endured nearly 2 weeks of Army accommodation this is really heaven in a lot of ways so I have no real complaints at all. No hot water? Are you kidding me in this weather? 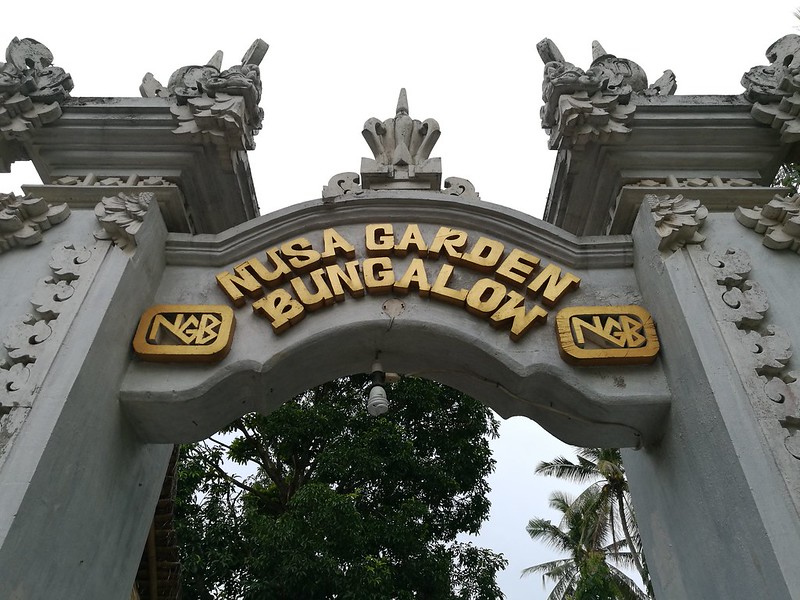 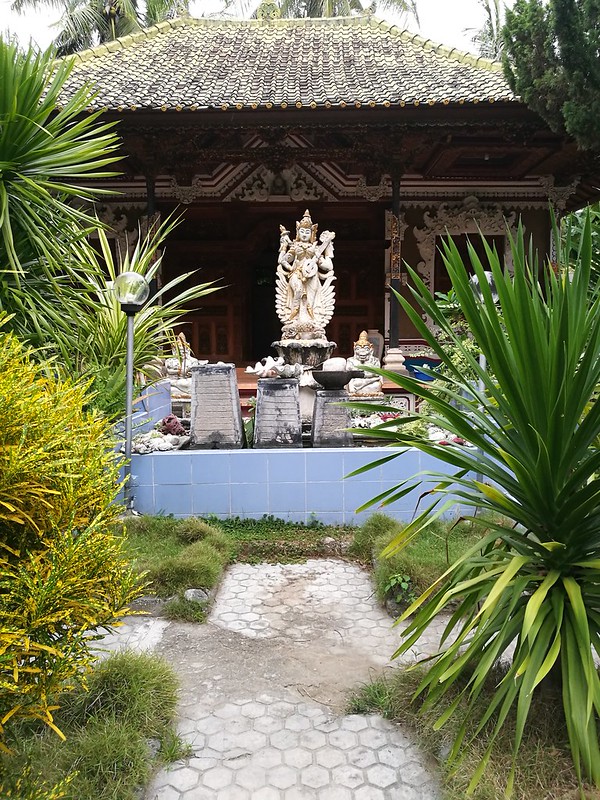 How I get around Penida

Sampalan village is by itself very interesting, take a walk from Sampalan centre to Mola Mola you can chance upon the locals and even some temples along the way. I have witnessed the locals playing the instruments and making altars for a ritual ceremony (which I missed because of my prior commitment on Bali).

But walking would not take you to a lot of places and so you have scooters and car. Of the two, I would highly recommend the use of the car and a driver. Why? Because of safety. The roads around the main villages and towns are laid with pretty good asphalt roads.

However once you venture outwards and you would have bad roads with pot holes with steep climbs. Even for those who has a riding license, it would be tough to navigate as well even with the signs, they are pretty scant. And better yet, if you have a good driver like Nyoman, they will help you along if there’s any problems.

Besides having a local driver would help you understand the locals even better and if you share the cost amongst 4 travelers it would be even cheaper too!

Still, if you do want to ride around, I would pay for a local rider to be a guide. Yes more money out of the pocket but at least, safety is not compromised. Do note the car rental is not for the whole day but 6 hours only or half a day.

There’s something about Hinduism and Buddhism and caves. Somehow spirituality is linked to these caves somehow and this is the same as Giri Putri Cave Temple. I have to walk  up about 7 to 8 levels worth of stairs then make my way down into the cavern via a small hole. Before that happens, I have to be sprinkled with holy water by the priest.

It is by no means a small cave as it stretches  for about 100 meters and with very high ceilings. At the end of the cave there’s an altar to the Goddess of Mercy or we Chinese commonly known as Guanyin. There was a ritual going on when I reached there. 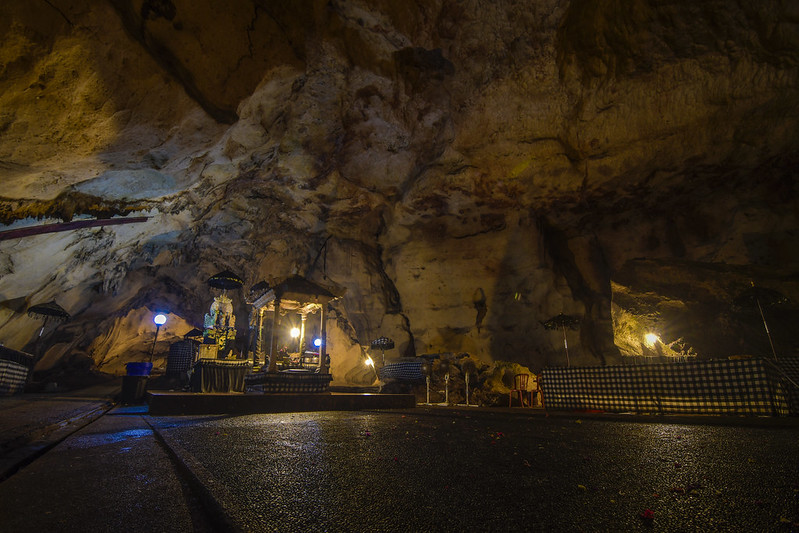 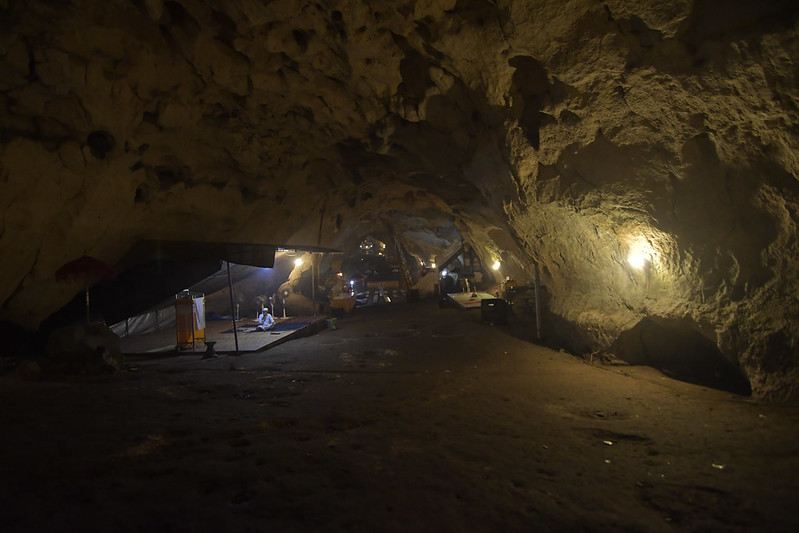 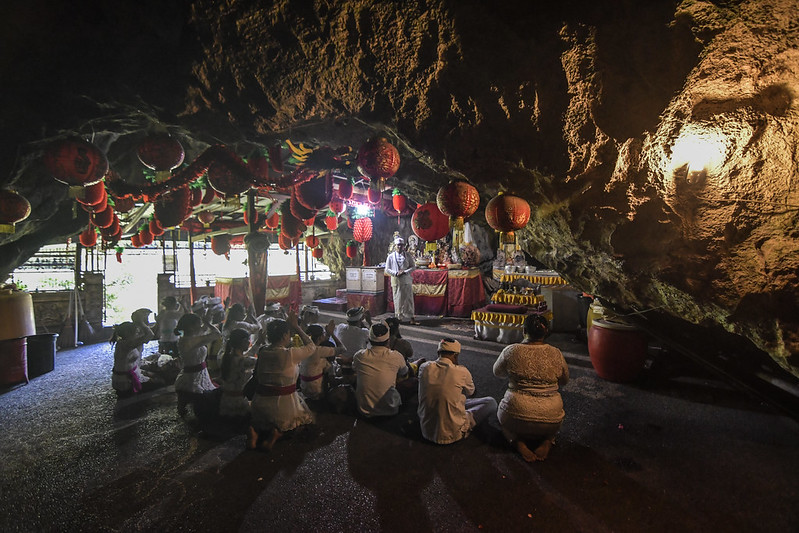 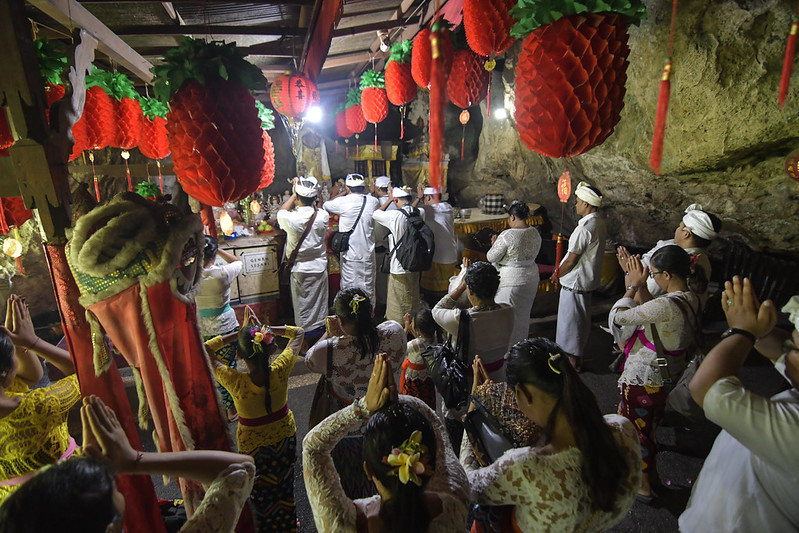 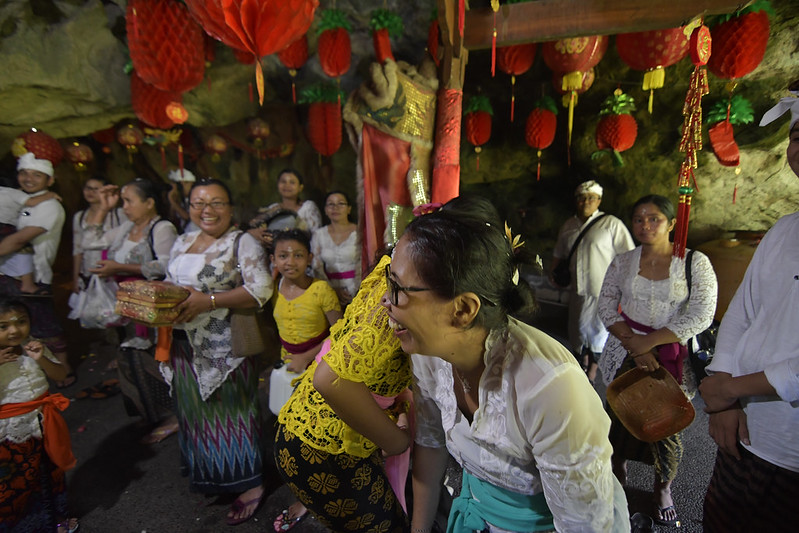 Bukit Teletubbies are a range of small hills with rounded tops that reminds us of Teletubbies. For the young readers, Teletubbies are those ‘creatures’ that has TV screens for their tummies of a kids television show that does nothing but to spew incoherent blabbering and they stay at a place that has similar landscape.

I did a simple time lapse video of the place with rolling hills and rolling clouds while I enjoy the silence of the place. 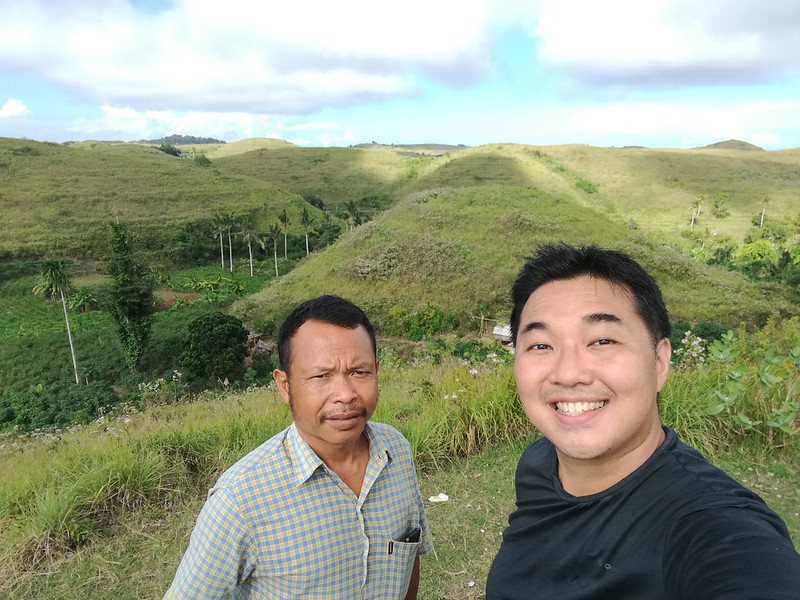 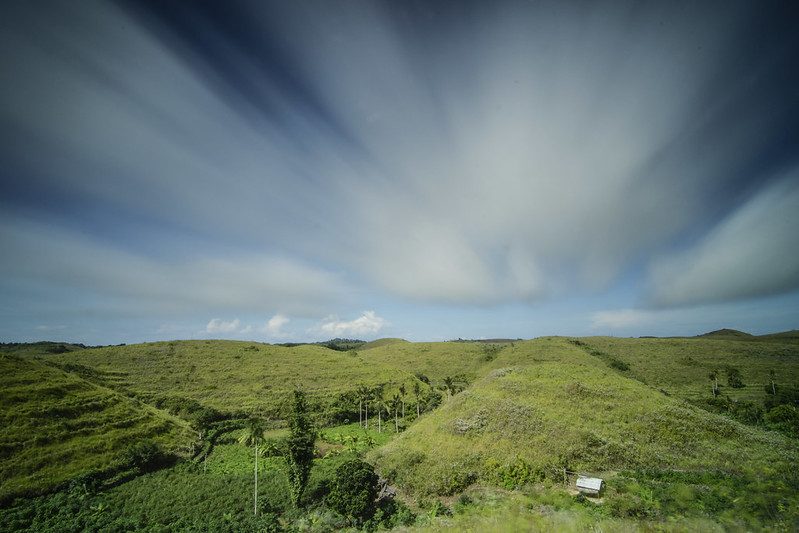 Equipment: Tripod with smartphone holder and time lapse set up in the smartphone.

There are a few beaches around the island but Atuh beach is the one I choose because of the fact that it face east with a very nice looking rock outcrop. The trip down to the beach is not exactly a walk in the park but it is definitely easier than the other beach on this side of the island called Suwehan beach. Suwehan beach lies right behind a cliff face and so climbing down the steep cliff face is not going to be easy (especially when you have a reconstructed knee).

And so I decided to head to Atuh Beach halfway through climbing down to Suwehan and I am glad I made that decision as walking down to Atuh and up again takes as much energy. Atuh beach has a much better path down with cement steps fortunately but it would be good to be a bit fit as the climbing can be quite tedious. Well as they say be tenacious in what you do and I survived the climb and came back with awesome photos (at least to me).

So why Atuh beach just before sunset? Yes normally we would go to a East side location to shoot sunrise and Atuh beach is the perfect location to be. But I go to Penida during the new moon phase, that is the moon is much closer to the sun and would not be as bright as full moon that would not help in astrophotography. Yes. I reach Atuh close to sunset, enjoy the place (there are some stalls selling water actually!) and then set up the tripod as the tide recedes. So I have a closer position to the rock island with rock foreground, a bit of moon light to help light up the scene and the perfect position to pick up the milkyway as the sun sets.

Equipment: Ultra Wide Angles (11-16mm for APS-C) and tripod. Super stopper filter if you want to achieve silky water effect and moving clouds.
Settings: 25 seconds for milkway at ISO 800-1000 (quite dark so I push down the ISO to avoid as much noise as possible). 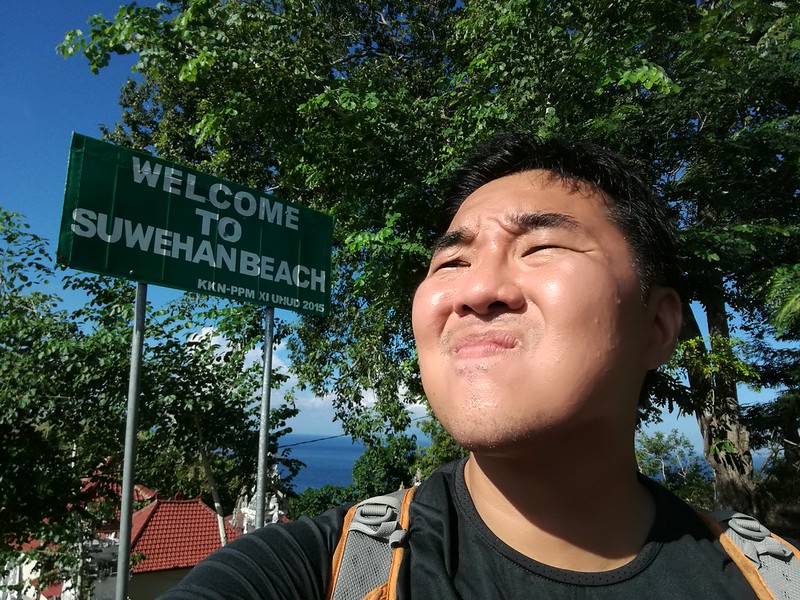 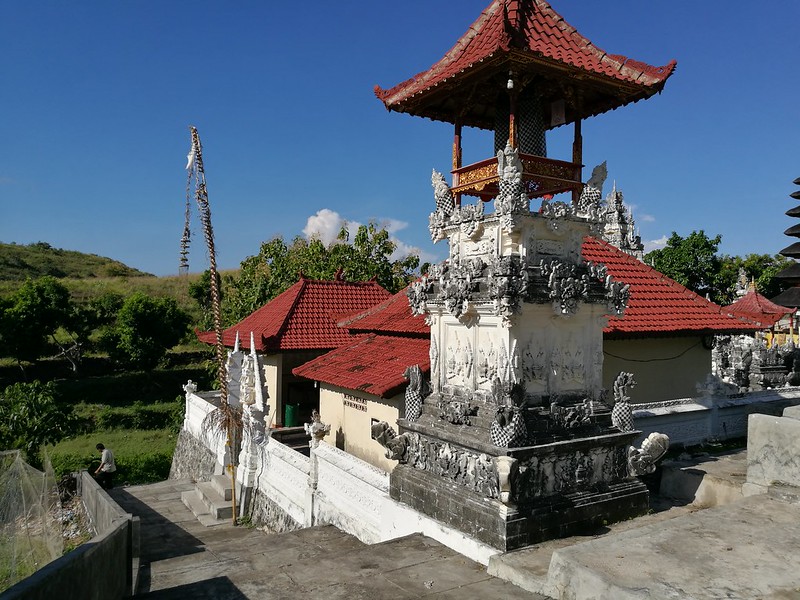 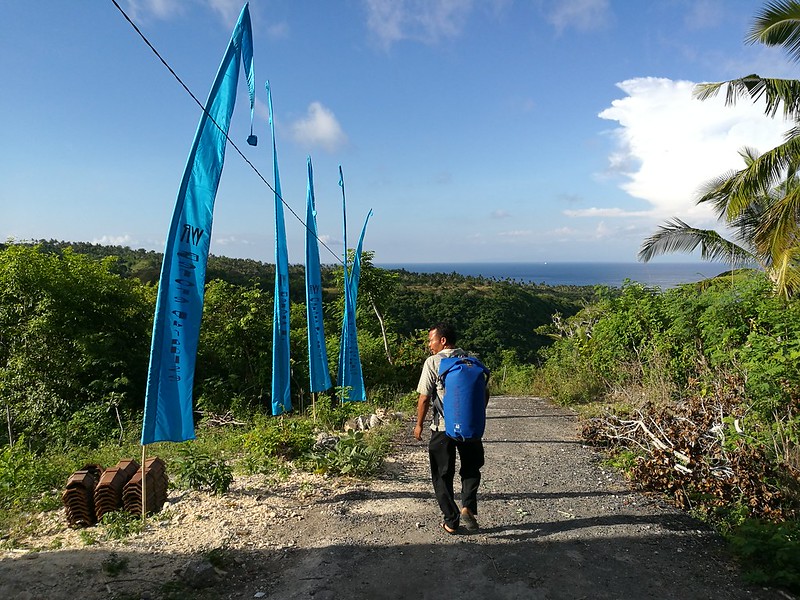 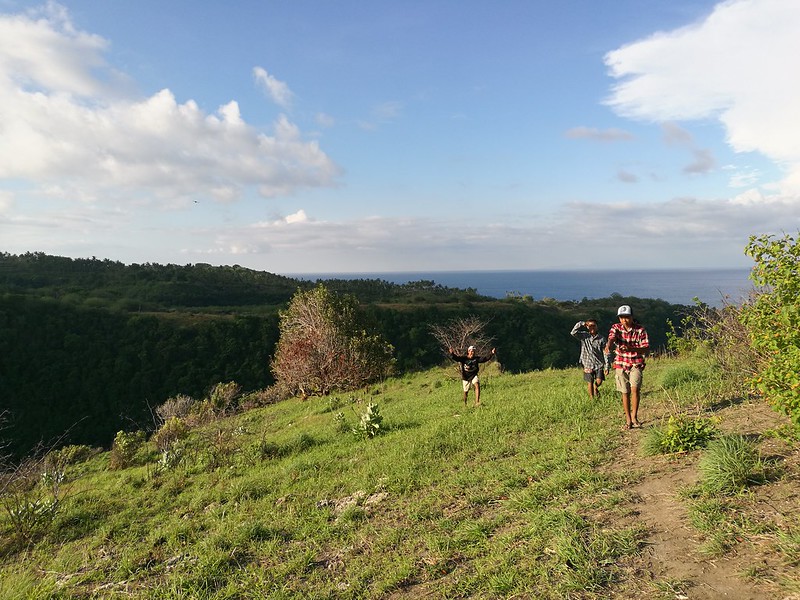 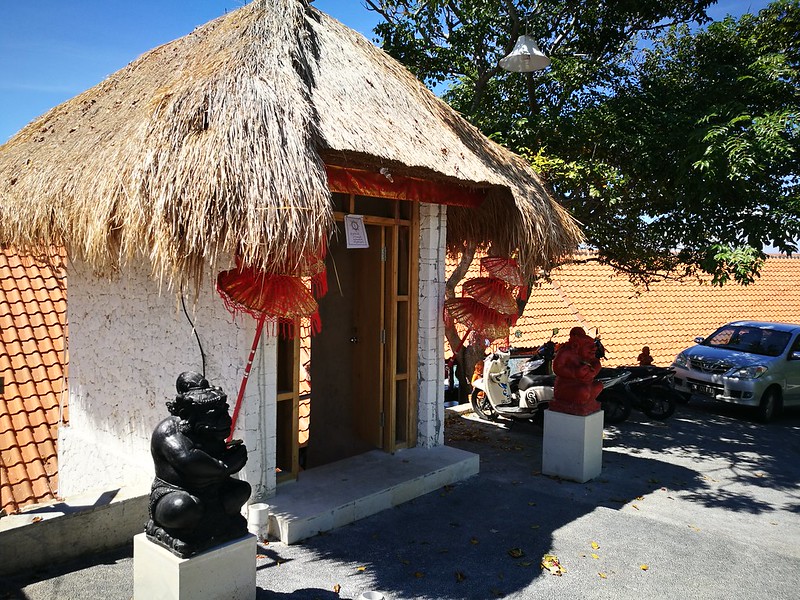 If you are staying at Sampalan Village then you can either eat at the Sampalan pier where you disembark  with small Waroengs around or you can buy copious amount of cup noodels and make hot water to eat with.

And there’s a much more enjoyable option called Mola Mola Waroeng which sits on top of the small hill, overlooking seaweed farm below. This is the perfect place for you to enjoy Mount (Gunung) Agung of Bali with sunset and the enjoy the surrounding seas with a beer in hand.

When I reached Mola Mola for 2 dinners, the sun has already set but I do have a consolation shot of the milkyway with the waroeng’s altar in the foreground. Not bad at all.

Needless to say there are more things to explore when it comes to Penida and definitely demands a second trip but this time should be longer than 3 days 2 nights that would include the Western and Southern coasts and throw in a snorkeling expedition as well. If you are interested to join me do send me an email and we shall see what can be done.