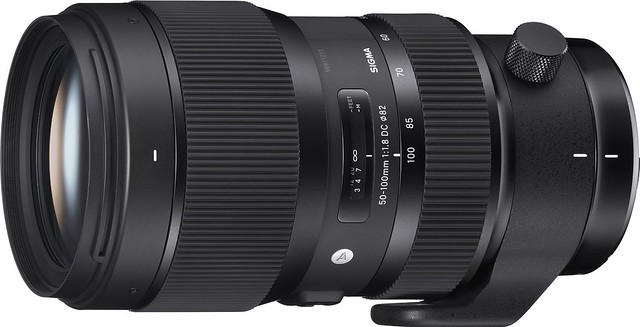 For those who are careful with their pockets, third party lens from manufacturers such as Sigma provides cheaper alternatives for the avid snappers. The Japanese firm is currently experiencing a renaissance with the introduction of the Art series of third party lens to be used with the major camera brands and the are following up yet another unique lens – the 50-100mm f1.8 made for the crop sensor cameras.

To the uninitiated, most lens that has an aperture rating of f1.8 and below are mostly single focal length lens such as the 50mm f1.8. The 50-100mm f1.8 (75-150mm f2.8 for crop sensor cameras in terms of image effect) allows the user to zoom at constant aperture of f1.8, a very useful range for covering events such as wedding and it follows quite closely the 70-200mm f2.8 lens used on full frame sensor DSLRs.

The lens also allows the replacement of three prime lenses that photographers used for portraiture shooting – 85mm. 105mm and the 135mm at full frame sensor equivalent. This lens is basically designed to replace multiple lens in the photographer’s kit bag and yet it only weighs in at 1.5kg. A lighter camera bag is definitely welcomed.

As an Arts series lens, the 50-100mm f1.8 lens is living up to expectations in terms of build quality and materials used and you immediately feel that it is a well-engineered product from the moment you handle it. The pictures produced by this lens is plenty sharp with a slight warmth being added to the images. With the maximum aperture at f1.8, I used a much lower ISO setting than I normally would with my old 70-200mm f2.8 which contributes to both faster shutter speed and better image quality.

What I don’t like is the lens comparatively sluggish autofocus speed. Speed is rather subjective here but after handling so many lenses even from Sigma’s own stable of both old and new lenses including the Sigma DX 70-200mm f2.8, the 50-100mm f1.8 in comparison seems very slow. Maybe as a portrait lens this is not that critical but for an event photographer, getting focus quickly is very crucial and I worry if this lens is up to the task.

At first glance, this S$1588.00 lens may seem a bit expensive but if we take into account the number of lenses it can replace and free up space and weight, the value proposition rises. With such a wide aperture at f1.8, this lens will give the photographer maximum shooting options in most lighting conditions from daylight portraiture to indoor concert performances. What’s worrisome is that lackluster performance of its AF motor. If you can look past that, the Sigma 50-100mm f1.8 Arts lens is worthy of a space in your camera bag.

Many thanks for Shutter Journey (ourshutterjourney.com) for the chance to try out the lens.