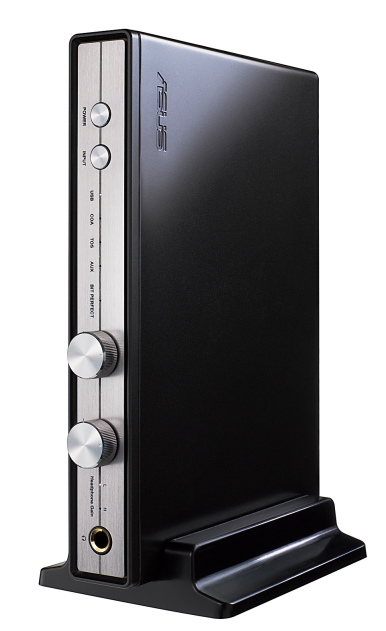 It was just two weeks ago that I have tested the Xonar U7 with Shure SRH240A and for a small package it was a good balance between good audio and portability. However, the small size do mean there are sacrifices to be made.

If one is looking for a permanent Digital to Analogue Convertor (DAC) , the Essence STU is something to look at. It is designed to be put with the computer or the games console and derive good sound reproduction for games and music. I would go on to say, it is not really designed for gaming like the U7 as the it has its own microphone and headphone volumes, perfect for communication during game skirmishes if things got a bit too loud due to heightened adrenalin rush.

The Essence STU really look the part to churn out audiophile quality sound and it does perform quite well.

The signal to noise ratio of 120dB is made possible by having a balanced PCB layout designed to reduce interference by the components. Coupled that with Texas Instruments’ PCM1792A DAC & TPA6120A2 headphone amplifier and higher grade capacitors (WIMA FKP2 & Nichicon Finegold), the whole unit is build to suppress as much noise as possible and producing true to natural sound quality.  If that’s not enough, the unit has precise clock tuning technology and asynchronous audio transfer so that the data transferred from the PC/Laptop via the USB is accurate. If that’s not overkill, I wonder what is but it can be a good thing to have if you have the ears to pick up the nuances.

So how does it sound? Again, using the same Shure, the usually mediocre Youtube sound track sound much better as the sound envelopes the listener with not a single hiss heard (unless it is inherent in the recording). At first ‘hear’, the treble and mid are well represented and go towards the ‘cool’ side of things with a weaker bass than what I hear from the U7. The U7 may have the heavier bass due to the fact that it is aimed at the younger set so comparing STU in that manner would confirm with the STU is designed for: audiophile music. So in that sense, listening classicals, Jazz vocals will be up the alley for the STU. I particularly enjoy the reverberation, clarity and bass level of the cello in The Piano Guys take on Pachelbel’s Canon in D. The nuances is perfectly captured as one closes the eyes to enjoy the placement and the imagery produced by the track. Never thought Youtube sound can be this good. Another good track to listen when it comes to The Piano Guys is Peponi – listen to the piano as it reproduced precisely each a key when it is played and also the percussion with the reverb deliciously rang through the stage sound. For vocals maybe Mike Tompkins rendition would allow you to hear the little details in his voice.

What of songs of a more upbeat type such as Pitbull mixes? For me who likes dance music for gloomier days, the STU performance in sound reproduction won’t be as critical. That said, it handled the bass pretty well and push it down to a point it doesn’t overwhelm the vocals and to some tracks, it depressed the bass a wee too much. Dance music needed the bass and having too much of it actually spoils it for me but too little and the ‘dance rush’ won’t come.

For the advanced users, the ability to swap the Op-Amps to change the tonal characteristic to one’s taste is something to consider.

The Essence STU at SGD599 is not going to be a cheap but put it in the right perspective and application and it can be seen as reasonable priced especially when one like to hear audiophile tracks. Available at Cybermind and Ban Leong Technologies.